The carrot (Daucus carota) is a root vegetable often claimed to be the perfect health food. Carrots are so commonly available, it’s easy to overlook them. But they’re a nutritious and versatile vegetable that can be used for so much more than just school lunch. Full of flavor and crunch, and famously full of beta-carotene and fiber, this root vegetable can be steamed, roasted, shredded, pureed, chopped, diced, pickled, and used in dishes from savory to sweet. Carrots grow year-round in temperate areas of North America, with California producing the lion’s share of the U.S. crop, so they’re a staple in the grocery store produce section. Orange carrots get their bright colour from beta carotene, an antioxidant that your body converts into vitamin A. 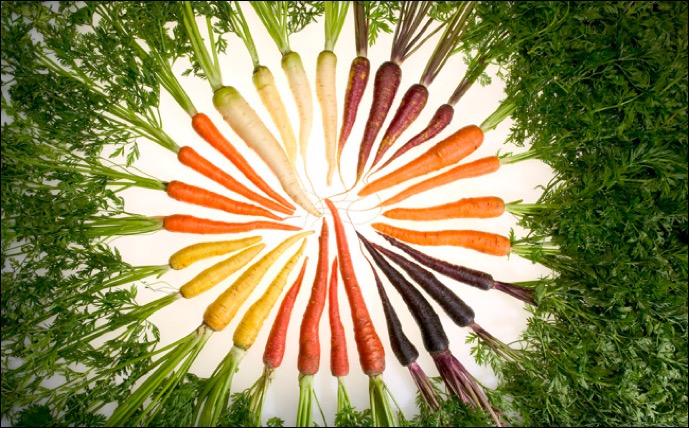 1) Eastern/Asiatic carrots:  (Daucus carota ssp. sativus var. atrorubens Alef.) These are often called anthocyanin carrots because or their purple/black roots, although some have yellow roots. These are cultivars traditionally grown in Turkey, Afghanistan, Egypt, Pakistan, and IndiaThey have pubescent leaves giving them a gray-green colour, and bolt easily. The greatest diversity of these carrots is found in Afghanistan, Russia, Iran and India. These are possible centres of domestication, which took place around the 10th century.

Anthocyanin carrots are still under cultivation in Asia but are being rapidly replaced by orange rooted Western carrots.

2) Western or Carotene carrots: (Daucus carota ssp. sativus var. sativus)  These have orange, red or white roots. Most likely these carrots derived from the first group by selection among hybrid progenies of yellow Eastern carrots, white carrots and wild subspecies grown in the Mediterranean. The first two originated by mutation. These carrots may have originated in Turkey, now grown worldwide.

Carotene carrots are relatively recent, from the 16/17th century. Orange carrots were probably first cultivated in the Netherlands. Present cultivars seem to originate from long orange varieties developed there. Adaptation to northern latitudes has been accompanied by a change in photoperiod response.

This work by heidi fabros is licensed under a Creative Commons CC-BY Attribution 4.0 International License.

And so we bring this experiment in open pedagogy to a close (for now!)